I make 3D art as a hobby. Most of my scenes are ancillary to the stories I write, either as illustrations of side concepts, or to flesh out a character’s personality. As I blogged earlier, they also serve as origin points for further stories. When I strike a snag in a story, I leave it and make a render. That keeps the creative juices flowing and the story moving forward until I can work out the snag. Besides, it’s just fun!

Lately, however, when I look at my scenes, I am not happy. All of my characters (save for those in the background) are custom morphed from the ground up. That means they’re original to me and not purchased through one of the outstanding vendors in the art. I can’t say the same for the clothes, props, and sets, however. I see the same clothes on my characters that I see on everyone else’s. That bothers me. It’s one thing to use “out of the box” costumes for one-off scenes, and put them on characters in a setting that has been used 100 times by 100 other artists. It’s quite another when I see Aura Lockhaven, John Drake and Kitty, Jenny Killingworth and Sam Hallasee, or the Sarethian Seven dressed as so many other characters in so many other renders. I’ve become quite adept at crafting original textures for dresses and other garments, but that still isn’t original enough. My characters ought to dress like I describe them in the books.

To illustrate (pun intended) what I mean, let’s revisit the render of Aura. 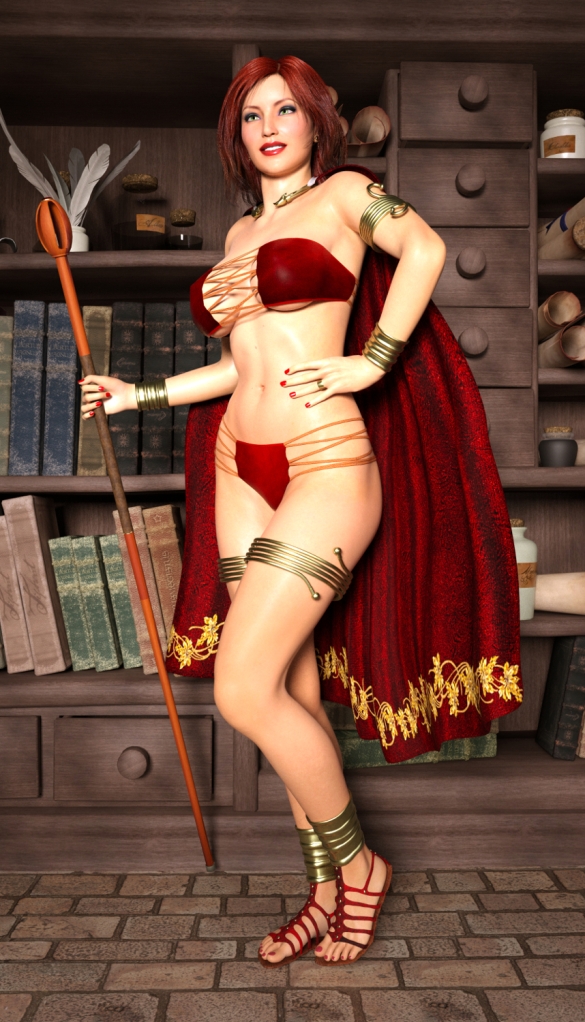 Aura herself is 100% original, except for her skin texture and hair. Those similarities are not a problem. They would only become a problem if I put her into a render with another character with the same texture and hair, and there are ways to tweak them to look different.

Her costume is 75% original. I made her shoes and jewelry in Hexagon (a 3D design program). Her bikini and cloak, however, are purchased items. I don’t see the Dynamic Bikini very often as working with it is a pain. Every time I move Aura, even if it’s just to reposition her arm, I have to redrape both the top and the bottom, and that takes five minutes each. It also isn’t exactly what she wears. It doesn’t fit right, either. Her bra should scoop below her breasts, not just lay across them; an impossibility with this particular garment. Most glaring to me is that it lacks eyelets for the ties. Being leather, it also should have some folds and ripples. The cloak doesn’t bother me. A cloak is a cloak, although Aura’s is red with gold Celtic knotwork on the edges and collar. These are close, but not exact, and they ought to be exact to fit her as an illustration of the story.

I haven’t even done one render of John and Kitty, yet. The available clothing for men is close to what John wears, but not quite. I have nothing even similar to Kitty’s dress. It has to be made. The other characters in that story wear clothing that establishes their ranks and positions in society. Again, those have to be made.

The same goes for Jenny and Sam (Leopard Girl). Jenny has appeared in one render as Jane Syren, but Sam has yet to be rendered. Jenny is from our world, but the late 1950s, an under-represented time frame in the 3D marketplace. A few jeans and dresses exist, but they aren’t glamourous enough for a B-movie actress. Sam has it worse; he’s a shaman. While he wears jeans and a basic shirt, the rest of his clothes, from his belt to his staff, are covered in shamanic devices. Those don’t exist anywhere (a raccoon skull?), at least to my liking.

As for the Sarethian Seven, I see their gold armor everywhere, especially Iryndelle’s, which is based on Boris Vallejo’s art. The more I look at it, the more I think it’s just too ornate for someone as serious as Iryndelle. Lunambyra’s is too skimpy, even for her. Besides, being a sorceress, she is more likely to wear a dress than armor. She also carries twin daggers, so where is she supposed to put those in that costume? I won’t clog up this post with another image, but if you want to see what the ladies are currently wearing, take a look at “Barbarian Wall” in my earlier post on renders. Iryndelle stands at the far right, and Lunambyra has her foot on the assassin. Coravanne, Enorra, Yveramore, Tannerra, and Noishante also suffer the same problem of costumes that do not match the descriptions in the stories. As for the men in those stories, I need everything from barbarian fur loincloths to full flowing robes, and nothing available quite matches.

So, to that end, I am going to learn how to design 3D clothes. Yep, I am going to become a virtual tailor. I am about to cut out pixels and sew algorithms!

Designing clothes will be a challenge. Actually, designing them will be fairly simple. Getting them to fit is the challenge. But I like learning new things. If I can pull this off for my characters, then I can design costumes for sale. It won’t make me rich, but perhaps the income will allow me to buy a few additional books every month.