Merry Samhain! For those of us with a decidedly esoteric mindset and belief, October 31 and November 1 are more than a time to dress up in cool clothes and gorge on chocolate. For us, it is the end of the old year, and the beginning of the new. The veil, or the barrier between our world and that of spirit, is thinnest. We toss out the past year’s garbage and snuff the old hearth fire, ready to reach forward into the new. It is also a time to reflect on one’s ancestors, be they of blood or of spirit. This year, I am thinking of one ancestor in particular, one in my craft of writing, which is odd because he was an artist, not a writer. Frank Frazetta, however, is the main reason I am a writer of fantasy today.

Frank Frazetta (1928 – 2010) was perhaps the most famous fantasy artist of all time. Many would say he was just an illustrator, but I’m not sure there is such a thing as just an illustrator. Besides, Frazetta painted art. He told stories through the medium of oil. If not the most famous, then he certainly was the most influential, inspiring those who are the reigning kings and queens today. He gave the world the iconic images of Conan the Barbarian, John Carter and Dejah Thoris, and Tarzan. He pretty much created the look we associate with barbarian and sword and sorcery fantasy. Frazetta put action on the covers of novels during a time when many of his contemporaries focused on landscapes. If not for this one man, I would no doubt be writing something completely different, if I were writing at all.

I was in tenth grade in the year 1978. My mother was at the zenith of her Charismatic fervor that year. That meant, that anything related to magic, role playing games, sexuality, or anything else not officially approved by our independent Charismatic shepherding church, was automatically “of the devil.” That included J.R.R. Tolkien’s The Hobbit. Unfortunately for her, my tenth grade English teacher assigned it as a class reading project, so there was nothing she could do except stay up all night praying in tongues that I did not fall into Satanic temptation. Naturally, if our church so adamantly disapproved of The Hobbit, then it was the one book I was determined to read that year, with great relish. And read it I did! I was smitten. When my teacher offered us the option to read The Fellowship of the Ring as extra credit, I seized upon it. Mom never did know that it was optional, but by the time she died, she had forsworn the church, spending many a night watching Buffy the Vampire Slayer with me, and enjoying every second of a one night marathon of all three (extended) parts of The Lord of the Rings.

Anyway, back to 1978. We had to buy our own copies of both The Hobbit and Fellowship. The high school bookstore sold The Hobbit, but not Fellowship. So, to get my copy, I went to The Family Bookstore in DeLand, perhaps the finest second hand bookstore I have ever known. On this particular day, my grandfather took me to the store as he wanted to pick up some more hardboiled detective novels. Now, I had never been in the fantasy section of the store before. This was a new area for me. I found it, and found my copy of Fellowship readily enough, but then my eyes were snared by a book turned out to reveal its cover.

Conan the Adventurer, a collection of short stories by Robert E. Howard, and illustrated on the cover with a painting by Frank Frazetta. 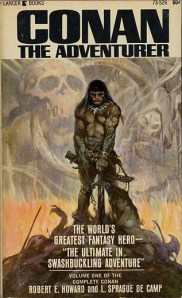 I didn’t know what a Conan was. In fact, I pronounced the name like con-man (it’s pronounced Coh-nan). But I didn’t care about the title or the stories. I wanted that cover! If featured a naked woman. My exposure to the earthy side of life was almost non-existent, a living hell for a flesh-and-blood American boy of 15. Remember, sex and the human body was “of the devil.” So was even dating a girl. This book’s cover was my first real exposure to the glory of woman. So, I grabbed that book, and Fellowship, gave Judy my fifty cents, and took them home. To make sure I could continue to look at that cover, I hid Conan the Adventurer behind my battleship models, and next to my James Bond novels (Mom didn’t know about them, either).

A few weeks later, I decided to crack the cover and check out the stories. By the end of that year, I had split the book in half from three readings. I was, and still am, hooked. Robert E. Howard and J.R.R. Tolkien are my other two professional ancestors, and I can trace them back to that same era. For today, however, I pay tribute to Frank Frazetta.

It didn’t take long for me to become a confirmed fan of fantasy literature. Lord Foul’s Bane and The Sword of Shannara made their appearances within that year. Being a little more bold, I checked them out from the library. I also became a fan of fantasy art. I took every opportunity to peruse the collection of Frank Frazetta’s art at the mall’s Waldenbooks. In my junior year of high school, I discovered Boris Vallejo, another great fantasy artist. Over the years, my interest in them grew from merely wanting to look at their nude women to studying the stories they told in every painting. I always preferred the eroticism and anatomical perfection of Vallejo, but everything else about Frazetta. First, his men looked plausibly muscular, and his women were full-figured. These people could exist. Second, everything in his scenes is in motion, even if the characters stand still. You can hear Conan’s hand squeaking on the leather of the sword in the above painting. You can hear the woman breathe. You can smell the blood and the sweat. Third, every image tells a story, even his self-portrait. There is no question that Frazetta painted himself in a moment of rage; it’s all over his face. All of Frazetta’s art is like that. I always wanted to make my own art like his, but my drawing skills are minimal, and my eyes have strange lighting issues leading my paintings to be oversaturated with color. Then, in 2008, I discovered DAZ Studio, a 3D art program (look back in my recent archives for more about DAZ). I could make my own Frazetta-esque art, without having to fight my terrible eyesight.

After playing with DAZ Studio for two years, I made a series of renders I called “Miss Barbarian,” essentially nude barbarian women, much in the style of Frank Frazetta and Boris Vallejo. This was one of them: 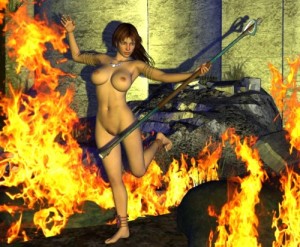 That one render became Aura Lockhaven. I think most of you know by now that Aura is the centerpiece and queen of my fictional world. I discuss the evolution from render to planned ten novel series in my post “Those Crazy Ideas!” In that particular post, you can also see the two renders that ultimately led to the creation of the Sarethian Seven, and the character I now call Jenny Killingsworth (“Leopard Girl”). All were inspired by Frank Frazetta, and ultimately, that one cover back in 1978. So, essentially, 85% of my current fiction plans can all be traced to one painting, “Conan the Adventurer,” painted by Frank Frazetta. In fact, The Sword of Moradacus, my epic (and the one story that did not begin as a 3D render), could be said to be the child of that one painting, because I doubt I would write fantasy today if not for seeing Frazetta’s work so long ago.

So, I can essentially blame my life today on one man! This is all Frank Frazetta’s fault! I wish I could have met him, shaken his hand, and told him what one of his paintings inspired. One day, I hope a print of “Conan the Adventurer” graces the walls of my library. Until then, I have the hardcover trilogy of his work; Legacy, Testament, and Icon.

Thank you, Mr. Frank Frazetta, for your life, your talent, your great gift that you shared with us mere mortals. Thank you for inspiring one rebellious nerd so long ago to reach out into a bigger world.